Being born into a religious society, I repeatedly came across the phrase “coming towards prayer is coming towards success”. I always wondered how these two contrasting fields are connected to each other and how come one becomes successful by offering prayers?  To my misfortune, I didn’t get a satisfactory answer, initially. Not just prayer, other religious activities like fasting, reading Holy Scriptures and going on a pilgrimage did not made much sense to me. The question kept bouncing in my head that what worldly benefits such religious chores can bring to a person.

What concluded my pursuit was this theory, explained here, that I came up with after years of ponder and experiment. My tipping point came when I learned about “Law of Vibration” from a writer and motivational speaker named Bob Proctor. According to him, science and religion, when properly understood, are the same thing and not contrary to each other.

This makes a lot of sense to me now as I believe that all the metaphysical things religion talks about like being born without father, breaking sea with a wooden staff or travelling across skies within a night,  appear so impossible only because we have not yet become scientifically advanced to comprehend them. Just as talking to someone living on the other side of glob seemed so impossible a couple of centuries ago, but today, thanks to modern communication technology, it a norm. 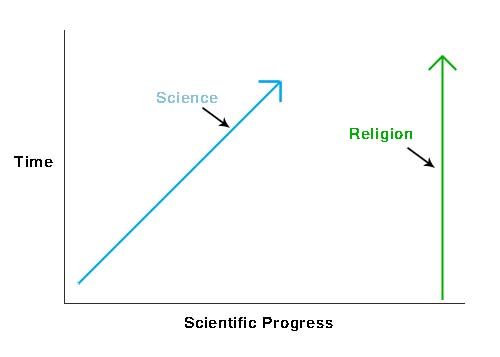 Religion, I believe, is the most advance form of science. With time as we further progress in scientific knowledge, we will get closer towards religion. In the theory explained below, I attempt to explain the claim made by religion, that offering prayers would bring you success, scientifically.

Everything, including the device you are using to read this article, is moving. It may appear to be static, but when viewed through a microscope, you will see very small atoms, which make up your device, are vibrating constantly. Same is the case with the table in your room, or the bed, the lamp and literally everything that surrounds you (including you). Small atoms, which human eye cannot see, are constantly in motion and vibrating in predefined patterns. Have a look at the image below:

Next concept of this theory is that objects with similar vibration frequencies are attracted to each other. Two objects that vibrate in harmony will get closer to each other and easily mix together. For example, salt and sugar easily mix with water. Why? Because atoms of these substances have similar vibration patters to the atoms of water. On the other hand, oil, despite being liquid, refuses to mix with water. This is because atoms of oil vibrate in conflicting patter to that of water. Objects with similar nature join together and objects with contrasting natures get divided. Here I am reminded of the famous quote:

“Birds of feather, flock together”

At this point you may be thinking that I am teaching you elementary grade science but hold on and keep reading, it will eventually make sense.

Substance like sugar, salt, water and oil all have different natures and mix only with elements which are similar to them, or in other words, which vibrate in harmony to their own vibrations. Human beings are no different. Different people have different characteristics and they attract only those things and personalities which vibrate on the same level as them. Ever wonder why you like some colours and they go by your personality while others don’t? And do you naturally feel happy in some places, like mountains, while uncomfortable in other places? This can be explained by the same rule mentioned above. The vibration patterns or frequencies of some colours and places are in harmony to the vibrations of your personality, thus you like them. While vibration patterns or frequencies of colours and places you don’t like are in conflict with vibrations of your body, thus they make you uncomfortable.

God has set fixed characteristics for everything in the world except for humans. While all dogs ought to be obedient to their masters, same is not the case with human beings. When dealing with human beings, we have people with varied types of personalities. Some are loyal, some betray. Some people can be kind to others while some are criminal minded. But dogs... well, are dogs!

Human beings are the only creature in the world which has control over the development of its own characteristics or personality. You cannot train a pigeon to hunt like an eagle or a rabbit to be brave, but the same person who fears dark can be trained to fight like a commando in a matter of few years. This ability of human beings to alter their characteristics, or in other words, their vibration levels, gives them superiority over other creatures.

This change in characteristics of a person, when studied at micro level, is basically a change in vibration frequency of the atoms of their body. To change vibration frequency of atoms and molecules you need energy. Let’s take example of water to understand this. When heat energy is applied to water, vibration of its atoms change and it transform from liquid into steam. This change from water to steam was nothing but change in vibration levels of atoms of water caused by heat.

Similarly, to bring a change in human beings, we need energy. This energy comes not from any outside source, but from an organ within body called brain. A human mind is the most amazing thing on the face of earth which can produce immense amount of energy. Our thoughts are possibly the most powerful intangible force which can alter our characteristic. What we think, we become... like literally!

The songs we listen to, the movies we watch, the books we read and the people we hang around with all force us to think in a certain way. These thoughts then begin to influence our body by changing vibration levels of its atoms and molecules. And during this process, without us noticing, our personality is constructed.

People can generally be classified in two types of personalities i.e. positive and negative. Those individuals who are positive in their thoughts always tend to look upon the brighter side of life. They attempt to see the good, even in the bad. Such people are in a “Positive Vibration,” and therefore attract other positive personalities and circumstances to them.

Negative personalities, on the other hand, habitually look upon the dark and depressing side of life. Even the good holds some bad for them. They dwell on the bad and the negative. Due to the negative vibration which they keep themselves in, they of course attract other miserable personalities and circumstances to them.

Let’s summarise the theory presented above:

Coming back to spiritualism...

That’s enough of science, lets come back to spiritualism. But do thoroughly revise the summary points listed above so we can answer the big question: What worldly benefits religious chores can bring to a person? Well, all the activities suggested by most religions like praying, fasting, going on pilgrim and feeding the poor force us to think in a certain way, so that our thought have a positive influence on our body. They aspire to change our body into positive vibrations so we can attract all the positivity in the world.

Once you enter the positive vibrations, you will naturally refuse to be at wrong places and mix with wrong people, just as oil refuses to mix with water. Sinning would become more difficult for you, your hands will shake and you will think a thousand times before you inflict harm to someone. You will involuntarily develop disliking for immoral acts and liking for acts which benefit whole of humanity. Nature will come to play its role by not providing you with many opportunities to sin. Even when you are inclined towards sin, due to human desires, natural forces will make things more difficult for you. You will become more humble and less arrogant. Once you have achieved that level and developed such habits in your personality, you will be destined to success.

So when religion tells you to do something in order to be successful, it has a scientific theory backing it to prove its claims. It’s just that we don’t know it as yet. And as we progress scientifically, hopefully the gap between religion and science will shrink.